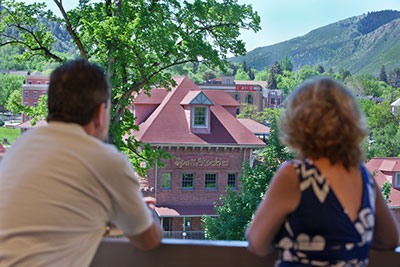 How the Hot Springs Pool Shaped My Life

The Hot Springs Pool changed my life in so many ways. It all started when I was offered a job at the pool-renting swim suits, towels, and cleaning the bathhouse. I was 12 years old making $1.40 an hour; I was so excited and I thought I was rich! Which I later realized I received so much more than the pay I made. I became a swim instructor and lifeguard four years later. The pool manager at that time was an incredible role model for me. His outstanding leadership, his caring attitude towards his employees and the patrons shaped me into the person and leader I am today.

The pool manager prepared his Lifeguards to be ready to save a life at a moments notice. My most memorable rescue that I made during my lifeguard career at the Hot Springs pool was a double rescue when I was 18 years old. I was guarding at the Blue Slide Stand. There was a new guard in the deep end; she was as well trained as any of us. I was watching her area as well as mine when I noticed she had a panic look on her face. (I can remember this entire experience as if it was yesterday) I quickly search the area where she was looking to see a large male thrashing about struggling to stay above the surface of the water. Lori (not her real name) jumped off of her stand and started her rescue. I jumped off my stand and started to run towards the deep end. When I reached the deep end the victim had grabbed Lori around the neck and they where heading quickly down 12 feet to the bottom of the deep end. I blew 4 whistles, which was the signal for an emergency that a guard needed assistance. This was the first time I was involved in a 4-whistle event. I dove into the deep end and started swimming to the area that Lori went under the water. I took a deep breath and did a surface dive to the bottom. I found Lori and the victim standing flat-footed on the bottom of the pool with his arms tightly wrapped around Lori’s neck. I will never forget the look of true terror on her face. Their position was textbook, minus the terror on Lori. I came up behind the victim, I put my feet on Lori’s shoulders, and grabbed under the victims arms. I then drove my thumbs as hard I could into his armpits. The pain of this move allowed the victim to start to release the death grip he had on Lori. At that moment I pushed with all my strength against Lori's shoulders, which broke her free from his death grip. Lori took off for the surface and I headed to the surface with the victim who was a good 50-pounds heavier than me. When I broke the surface with the victim, I had to hold on to him with both of my arms due to his size. This left me with only my legs to bring us both to the side of the pool. The victim began trying to reach around to get me in the same hold he had on Lori. I tried talking to him to calm him down which did not work. I was left with only one option and that was a "behavior modification procedure". I rolled us so he was under the water and I was on top. I held him in that position for only a few seconds before rolling us back so he was on top. He required three more rolls before he calmed down and allowed me swim to the side with only my legs. When I reached the side of the pool the other guards took to over and lift the victim out of the pool. The ambulance arrived and transported the victim to the hospital. The victim was released from the ER later that day. I remember sitting back on my stand with the most incredible feeling and what an adrenal rush!! At that moment I realized I was meant to work in a profession that would allow me to have this feeling that comes with saving a life. I became a paramedic in 1982 and worked in EMS for 30 years. I am now working in a busy ER as a RN. This all would not have been possible had it not been for the life lessons I learned at the Hot Springs Pool and the love and support from my wife. My wife and I met while I was a lifeguard at the Hot Springs Pool, and that is another story. My pool career was eight wonderful years from 1972 to 1980.